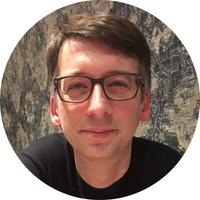 JavaFX is a set of graphics and media packages that enables developers to design, create, test, debug, and deploy rich client applications that operate consistently across diverse platforms.

JavaFX was created by Sun Microsystems, later became part of Oracle Corporation and is now an open source project on openjfx.io. Commercial support is available via GluonHQ, which is also the main maintainer of the project, with the support of many contributors (including Oracle). The sources are available on GitHub. Since version 11, the JavaFX module moved out of the Oracle JDK. With a similar 6- month release cycle of Java, JavaFX development speed has increased, pushing new features forward. 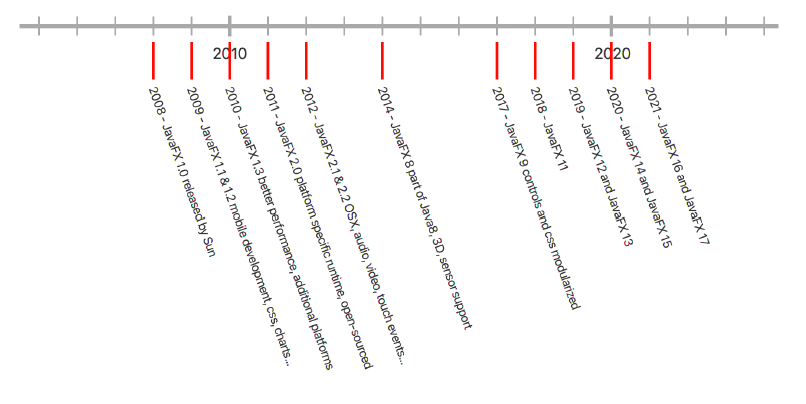 JavaFX allows you to quickly build a user interface while using the language and tools you already know as a Java developer. This can be styled with a CSS syntax and is very flexible and extendable and even allows you to draw your own layout elements as you can see in the history graph above, available on GitHub as part of the sources of my book “Getting Started with Java on the Raspberry Pi”.

JavaFX on the Raspberry Pi

JavaFX can be installed in two ways on the Raspberry Pi:

Personally, I prefer the second approach as you are sure to be using the latest JavaFX runtime, including all improvements for embedded devices. As this is a fast evolving market, there are a lot of ongoing changes like improved rendering and Direct Rendering Mode (DRM, also known as Kiosk Mode). An article with more information regarding this topic can be found on “JavaFX Running in Kiosk Mode on the Raspberry Pi”.

This great library is developed by Gerrit Grunwald and provides tiles to build dashboards. Check his blog for many more JavaFX examples! 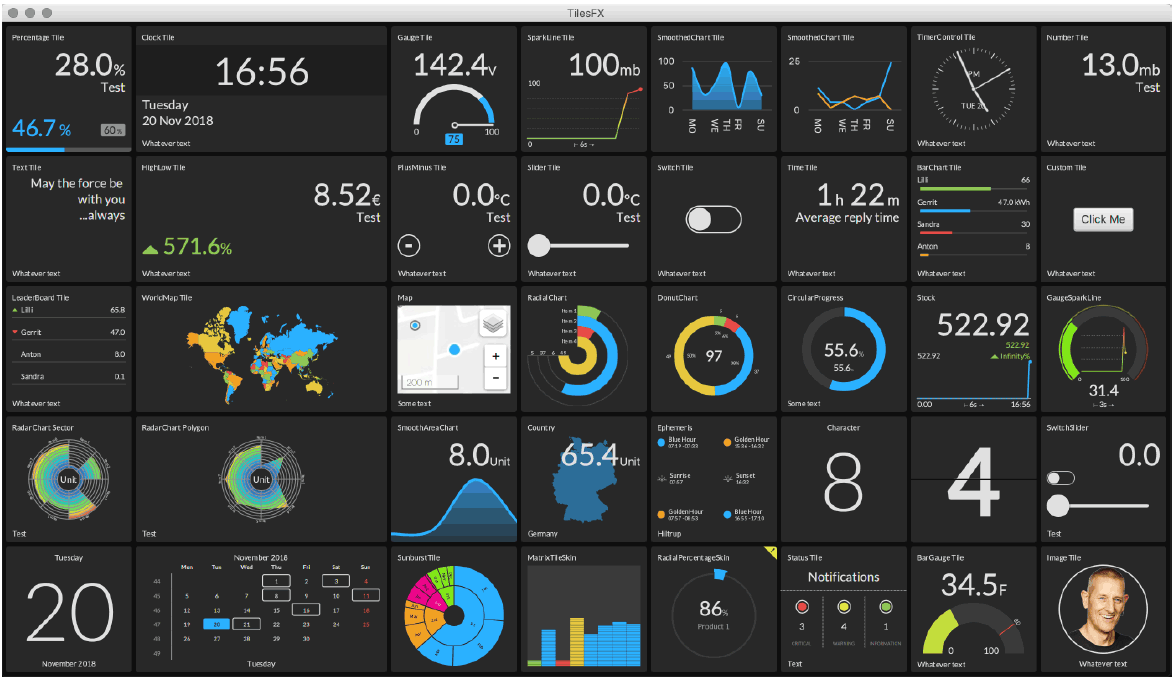 Let’s create a JavaFX application to visualize all the sensor values we pushed to HiveMQ Cloud with the application we created in the previous part.

This project requires a few different dependencies compared to the message sender. Of course, we use the HiveMQ MQTT client again. But for the graphical user interface parts, we need some JavaFX libraries (only controls are used in the application, but others are referenced by TilesFX) and the TilesFX library itself.

The sources of this application are available on GitHub in the same repository as the previous post.

TIP: All three videos accompanying this MQTT on Raspberry Pi blog post series are avialable on our YouTube Channel. Be sure to watch and complement your knowledge.

We need to extend from JavaFX Application and in this case we configure the HiveMQ Client in the start method. This could also be done in a separate class, but for this proof-of-concept it’s easy to use the client-reference to provide it to the child objects.

For easy maintenance of the topics, these are also defined here.

Visualizing Data in a Dashboard

In the Dashboard View, all the tiles are defined we want to add to our screen. Please have a look at the full sources for all the tiles. Here you find the code of two of them:

The temperature is one of the sensor values which is sent with an interval from the CrowPi. After subscribing to the sensor-topic, we will receive this data. By using the same Sensor-class as we used in the sender-application, we can easily map the received String to a Java-object.

The GaucheTemperature-tile and the other ones we initialized in the constructor, can now be updated with the received data.

Other data is sent by the publisher when the state of the sensor changes. For instance, when the touch sensor is touched or released, we will receive a true or false on a specific topic. To be able to handle this easily, additional components are created which extend from the Tile-class.

The SensorSwitchTile contains a SWITCH-tile and its active state is changed according to the value in every received message.

The subscription to the topic is handled in the BaseTile-class to avoid duplicate code.

As you can see, subscribing to a HiveMQ Cloud message only needs a minimal amount of code.

Building and Running a Java Application

This project doesn’t call any Raspberry Pi-specific functions compared to the GPIO-interface in the previous application, so we can run it on any PC. Also, here you have the choice to use a JDK which includes the JavaFX runtime dependencies, or a separate download. Both approaches are described more in detail on “Starting a JavaFX Project with Gluon Tools”.

On the other hand, when starting from IntelliJ IDEA, the Maven dependencies will take care of all this for you. 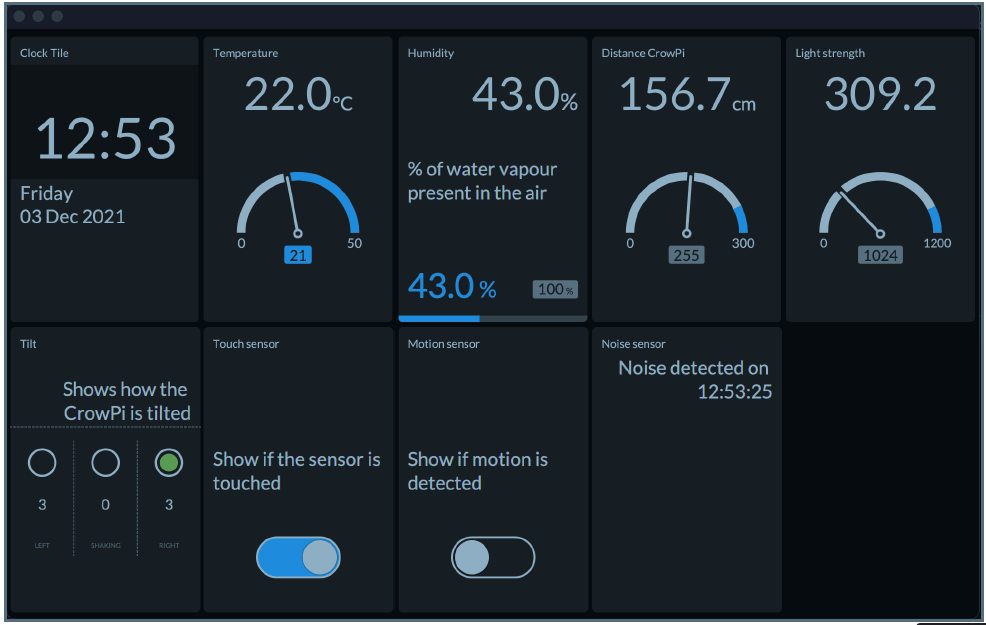 To run this application on a Raspberry Pi 4, I started with a new SD card with the standard Raspberry Pi OS (32-bit).

This is a “minimal” version of the Raspberry Pi OS, and doesn’t include Java, but this can be quickly fixed by running sudo apt install openjdk-11-jdk in the terminal.

Nice! Now we can already run Java-code on our Raspberry Pi. But for JavaFX we need the runtime which is compiled specifically for the Raspberry Pi. Gluon provides these versions via their website. We only need to download a file, unzip it, and put in a place which we will reference when we start the application.

As this dashboard application is a Maven project, we still need to install it, after which we can get the full project and build it on the Raspberry Pi. Follow these steps:

The run.sh script combines the compiled application jars, with the platform-specific JavaFX runtime and starts the application.

TilesFX is only one of the many open-source libraries you can use in your application, or you can create your own components. Gerrit Grunwald and other writers have explained this approach on foojay.io in multiple posts.

By using JavaFX, you can quickly develop beautiful user interfaces, and combined with HiveMQ Cloud this results in a nice dashboard application to visualize sensor data. By running this application on the Raspberry Pi, you can have an always-on dashboard screen for a very low price.

Frank Delporte is the Head of Software Suite at EEVE. He’s the author of the ebook “Getting started with Java on Raspberry Pi.”
Related Links