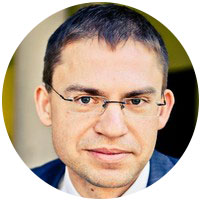 Welcome back for the 3rd (and final) blog post about the mqtt-spy “family,” an open source utility help you monitor activity on MQTT topics. This post covers some of the advanced features of the GUI-based mqtt-spy and the headless mqtt-spy-daemon:

For basic usage of both mqtt-spy and mqtt-spy-daemon there is no need to do any scripting.

There are however use cases which go beyond the out-of-the-box functionality – this is where scripting becomes extremely useful.

Scripting is a way of expanding the core functionality of mqtt-spy and mqtt-spy-daemon with virtually endless possibilities (well, almost…). Here are some sample use cases:

Further sections will cover the key areas that enable scripting.

The scripts are provided as either external JavaScript files (*.js) or inline. Both mqtt-spy and mqtt-spy-daemon utilise Java’s built-in JavaScript engine called Nashorn.

For more information and more samples see the Scripting wiki.

There are number of ways you can publish messages in mqtt-spy & mqtt- spy-daemon:

When manually publishing messages in the “Publish message” pane, you are limited by what you can type in the provided fields.

For all the other mechanisms listed above, publications are done using user-provided script files (with .js extension).

Let’s look at some examples now.

The above example is not much different from doing a manual publication though. The difference is when you want to either do something special to your message (e.g. generate a timestamp) and/or send multiple messages, e.g.:

 There are occasions however when you don’t want to predefine everything in the script, but only want to use it as a template for adding some extra info. To achieve that in mqtt-spy:

 To achieve parametrised publications using mqtt-spy-daemon, you can define a generic script, and then pass a map of arguments (key/value pairs) to the script using the daemon’s API.

If you use certain combinations of topic & payload quite often, it might be worth saving your message as a script, so that you can reuse it at a later stage. This is available from the publication button’s menu. You can save either the current message or one of the last 10 messages.

Once a script has been generated from the populated fields, you can use it and edit it in the same way as any other scripts.

You might thinking OK, what else can I do using those publication scripts? Here are some ideas:

There are a couple of things you can do with messages received on the defined subscriptions:

In mqtt-spy and mqtt-spy-daemon “formatting” is a means of modifying the payload of all messages received on a connection. This can be used for supporting environments where all messages use one or combination of the following:

For basic requirements, it might be sufficient to use one of the default formatters:

For more advanced users it is recommend to use scripted formatters. For both mqtt-spy and mqtt-spy-daemon they are stored in the XML configuration (and are Base64 encoded). To make configuring and testing them easier, you can also define them via the mqtt-spy UI (Menu → Window → Open view → Formatters): 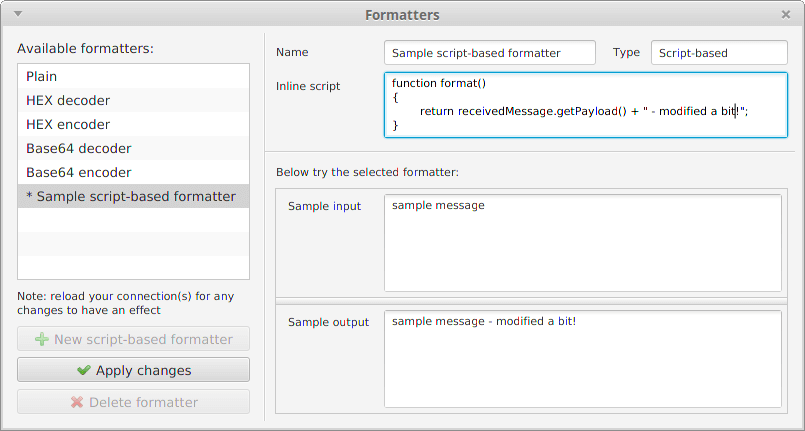 Please note that each formatting script requires the format function, which returns the modified payload. You can access the received message using the receivedMessage object.

An optional before function can also be defined to set-up any additional resources for all subsequent calls to the format function.

The “on message” scripts are run specifically for each defined subscription. The following methods are supported:

Below is a sample subscription script that automatically sends a reply:

Sample use cases for having the “on message” script:

From the 1st blog in the series you might know that you can search through the received messages – either all, on a given subscription or just from a single topic.

By default, mqtt-spy only checks if the provided string is contained in the (formatted) payload of each message. To give you more flexibility what messages to search for, you can either use in-line scripts or point at external script files.

To switch between the particular mode, use the Search button’s menu (as shown below). 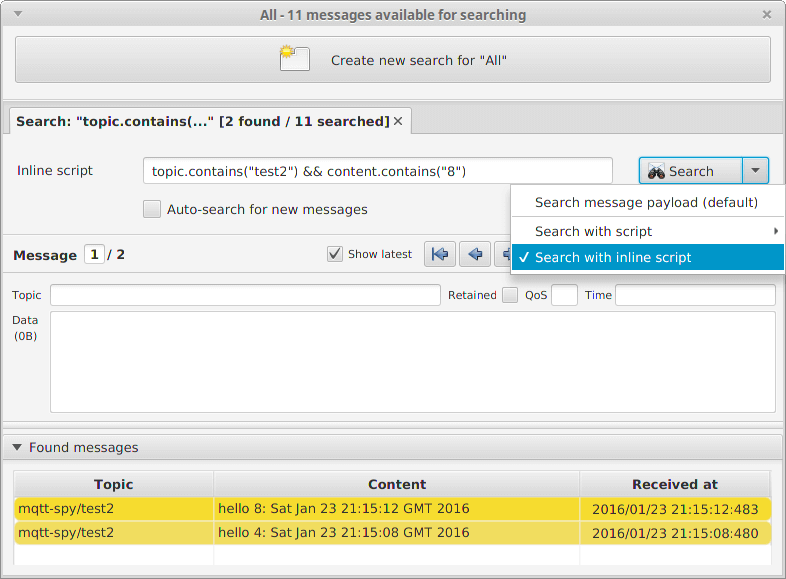  For more information and samples see the Message Search wiki.

Inline scripts can be either written in the simplified form, e.g.:

or the expanded form (without the helper variables), e.g.:

An external search script requires you to return either true (for matched messages) or false.

To access the properties of the message use the message object as in the “inline” example above, e.g.:

mqtt-spy’s message auditing is a way of storing received messages in a format that can be used for other purposes – e.g. replay, offline browsing, custom processing and analysis etc.

There are a number of ways of creating a message audit log:

Both mqtt-spy and mqtt-spy-daemon allow you to replay a message audit log file. You can either replay messages at constant intervals, or the actual intervals as the messages were received and logged.

The replay is done by an appropriate script, giving you access to all these options. One of the key features of the replay is the capability to run the replay at your chosen speed – e.g. 5 times the speed the messages were captured as.

See the Replay wiki for details.

Apart from spying on messages that are being sent through the MQTT broker, you can also analyse previously captures messages, without establishing any connections.

To open a message audit log file, select Window → Open view → Message audit browser menu, select the file you want to load, and wait for a new tab to appear.

The functionality for browsing and searching for messages will be similar to a normal connection.  

Test cases functionality available in mqtt-spy and mqtt-spy-daemon combines scripted publications and subscriptions into a single package. This means that rather than manually testing the behaviour of your system, you can define actions and expectations as an automated test.

After tests have been run, a CSV-based report can be generated for both the individual test steps within a test case and all test cases.

Note that when triggering actions or checking expectations, these don’t have to be purely MQTT pub/sub related – e.g. an action could be a SOAP request, and a verification step could check if you got the right message(s) back. For further information and examples see the Test Cases wiki.

There are a few things to remember when writing test cases. Each has to follow these rules:

In its simplest form, you could define a test case with 3 steps:

Once all steps have been executed and all assertions met, the test case is considered to have passed.

Below is a sample test case in which mqtt-spy test itself for performing basic subscriptions and publications.

And this is how it looks like when you run it in the GUI:  

Hopefully after reading this and the previous two blog posts about mqtt-spy and mqtt-spy-daemon you have a better understanding of how they can help you. There are some other awesome MQTT tools available, so check them too! Depending on what you need, they might be more suited for your use case.

For all its MQTT connectivity, mqtt-spy & mqtt-spy-daemon use the Eclipse Paho Java client – a rock-solid library allowing applications to connect to any MQTT-compliant broker.

As of January 2016, mqtt-spy & mqtt-spy-daemon are also part of Eclipse Paho & Eclipse IoT.

How to get involved

All contributions to the project are very welcome! Whether it is a bug report, a feature request, a bug fix, a feature implementation or just a suggestion – they are all very much appreciated. Get in touch via the GitHub page or Twitter (@mqtt_spy).

If you liked the “mqtt-spy” posts, please consider donating 1 of whatever currency you use (e.g. €1, $1 or £1) to UNICEF. You can do it via http://www.justgiving.com/mqtt-spy or directly on UNICEF websites. Anything counts!

Kamil is a Technical Architect at Resonate. He’s been working with MQTT and other messaging technologies since 2009 as part of the IECC Scalable development programme - the leading railway signalling control system in the UK.